Who Are You May?

Yesterday I was looking for something on the internet and ended up stumbling onto some very interesting  also old pictures. They were amazing photo's from the 1920's to 1930's in Sydney which were of criminals both ladies and men at the time. Going through these photo's and looking at them also the poses that some of them did were amazing. Some of the looks of the faces and what they were wearing left me with a sense that they were speaking to me through the ages.

I came across one photo which clearly stood out to me and I don't know why. The picture of this lady called May Russell taken on the 31st January 1922 in Sydney.

I don't know what drew me to her picture yet I found she had a beautiful yet sad face. She somehow reminds me of someone I know. The left pictue I felt said a lot with her eyes and expression on her face. Her hair looks a bit ruffled and stood up a bit obviously from wearing a hat in the next photo on the right. I wonder what brought her to the police cells where this mugshot was taken. Did she pick pocket something? Steal something from a shop? Was a prostitute? Maybe she got in a fight or altercation? Did she kill someone? Or sold sly grog to people? Or was a illegal abortionist or helping it? Maybe some other crime that I can't think off at the moment? Did she get into trouble for some type of drugs?

Also what strikes me is that she is very well dressed with her shoes, stockings, skirt, coat, shirt, bag and hat that she was wearing on that day she was arrested. I also found it interesting how she was holding the bag in front of her trying to protect or cover herself with a strong determined look on her face. Her stance in the second picture also looked forlorn which led me to ask myself a very simple question.... Who are you May? What was or is your story?

I've had a multitude of questions going around my head for the past day just wondering about her and what happened to her for the rest of her life. Did she have a boyfriend? Girlfriend? Husband? Or did she have any children? How old was she when the picture was taken? Are there any more details about her? I looked up her name on the Internet yet couldn't find anymore information on her anywhere. May I should try to do some more to find out. Where in Sydney did she live? What work did she do? What kind of music did she like? What was her favorite food? Did she watch any movies back then if they were around? What kind of friends or family did she have? How old was she when she ended up passing away? What happened to her after this picture? Both in the near future and the rest of her life? Did she find happiness at all?

Yet in the first photograph you could see all her vulnerability with her slouched body posture yet her face was very attractive, human just looking at the camera and seemingly beyond that into my soul with those eyes of hers. For me having Asperger's I'm still trying to work out what that look is saying and how she was thinking and feeling inside. For me it is a very mysterious intriguing look which has left me totally mesmerized indeed. I've looked at this photo quite a few times of the day and each time I look I am drawn into the picture. I have a larger version of this picture which I also include because it is with the larger photo that I am drawn in with.... I don't know why yet she has got me very intrigued and will be a mystery to me... Maybe forever.....

At last I've got a brand new computer which I've been slowly saving up for. After much discussion with my parents I was out with them last month and got one. The reason being is my old computer which I think I got in August 2009 or 2010 had ran out of memory. That was because of my big Itunes library and also photos which were somehow locked into my Iphoto gallery. Yes I did put as much of it as I could on to back-ups and the like yet it wasn't working anymore which was so annoying. 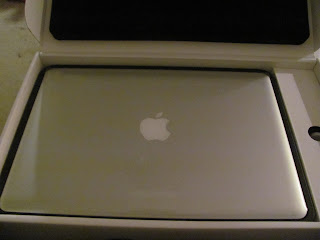 That was a big reason why I couldn't blog very much over the past few to 6 months because I had trouble putting more photo's on the computer so I could put on my blog. Now the problem is solved and you will see more blogs from me from now on.... So a big YAY...... 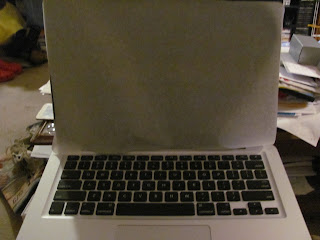 I'm still getting used to the new computer big time because it is quite different from the last one. I've been finding that sometimes the littlest differences are the most annoying with my Asperger's. I find it hard adjusting to new changes and everything that's different. It feels so good because it's got loads more space which I'm now being very careful with. Here's a couple of photo's of my new computer for you.... 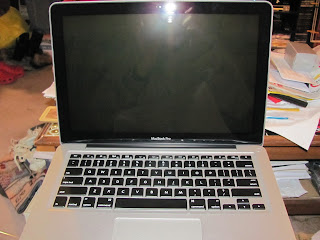