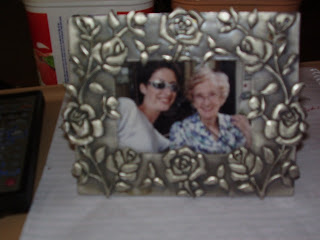 Imagine a bright hot sunny day on Saturday the 13th of December 2003 where the season of summer had started in Australia. I was showing Peter around who was a friend of mine from Switzerland and we were just walking back from a local beach. On my mobile I got a phonecall from my Mum wondering where I was as she was out and about also with a friend. We organised that she come drop in at my place for a visit which seemed fine.

So half an hour to an hour later Mum and Kathy stopped by. It was then that I was informed that my beloved Grandma had died shortly before quietly. Mixed feelings of shock and disbelief rocked my body to a different place. Poor Peter my visitor must have thought he had walked into a family drama of sorts. Yet my Mum said that she wanted to see her body with my Dad and somehow I was to come also. My memory was a blur from then on and we ended up at the nursing home where she was. Walking into the room where she was laying and finally seeing her was really surreal because it brought home the fact that she had gone. My precious Grandma had gone to a better place after so long. I

was the only Grandchild to turn up and I think my Uncle as well as Aunt was there also. Holding her now cool skinny bone-like hand was important for me having Asperger's. Seeing her I felt that I could let go better and say "Goodbye" to here in my own way. I also saw my Grandpa a few years earlier when he died and that was really comforting. Yet his body was still warmish at the time I had arrived more quickly at his side then.

Any way the funeral was quickly sorted out with the tumultuous time before Christmas being only less than 12 days away. Plans were disrupted for the whole family with the matriarch holding us all together had gone. I'd even had already bought her a Christmas present of a calendar for her that I realised she couldn't use anymore...or I give her The day of the funer 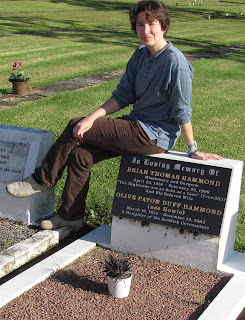 al was a really hot day where everyone gathered at the cemetery up in Cooranbong in the little chapel up there on the grounds of Avondale College. The ceremony was held to remember her where I think I read out a poem or something I wrote for her. If my memory serves me correctly she was led out to the grave with a lone Scottish bagpiper playing. Her proud Scottish heart would have been pounding if she were alive...yet she wasn't.

Now seven years on I still miss her and think of her quite a bit. I've got a couple of photo's of her around the place and still look at them. A month or so ago I also saw her grave for the first time since that time and seeing the gravestone meant a lot to me. After so long I could see her resting place again and remember what a wonderful Christian woman she was. The same blood that beated in her is running through my veins today living on in her memory... Oh Grandma how I still love and miss you...May God be with you...
Posted by Megzz at 9:26 PM 3 comments: