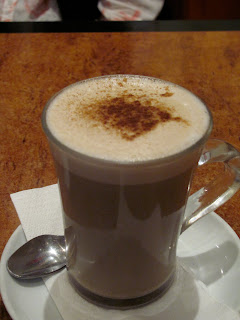 'Just say cc...Just say cc's' Words from an advert in the 1980's. Well on Tuesday it was just say cc all the ways from going to a cafe with a friend of mine and I had a Chai latte which was exactly like I needed. There was no sugar in it for it was so naturally sweet and natural the way it was. It was just right. Also had an entree of croquette's which hit the spot just as good.

Wednesday's cc's were crumby and chilling. This time nothing with food...yet felt overtired from the big day before which was probably normal. Trying to chill and not look at the computer/ internet work that I have to do on it. Also catch up with a few things.

Thursday's cc's were chowed and cramps. I went to some good friends from church for dinner tonight which was cool. There was also another person who goes to bible study was there also. I was so hungry that I chowed down my food really quickly and maybe to be expected...I have really bad gas and also cramps from it.

There is one thing with my Asperger's is that I can have a really sensitive stomach and so I have to be careful with what I eat and put inside of if it. Because if I'm not careful it goes crazy and into meltdown then a small explosion at the end of it.

So here's two more cc's that I have to remember is Careful Champ! To save me from Crumbs...the cramps!! CC you later then!!
Posted by Megzz at 11:23 PM