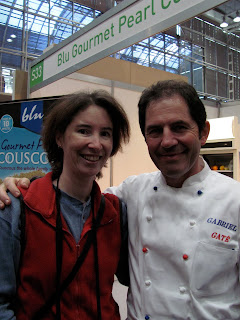 On Sunday my Mum and I had a girls day out to The Good Food & Wine Show which was being held at Darling Harbour. There were five big halls of food and wine heaven where there seemed to be anything and every thing which people could try. There was Quail, Biltong, Pomegranate liqueur, fish, cheese, deserts, duck amongst a whole lot of other morsels.

There were a vast number of different chefs, cooks, demonstrators and also food companies at the show each promoting all interesting products. One of the chef's there was Gabriel Gate' an amazing French chef who lives in Australia. (Please note: I can't find the proper 'E' with the " ' " over the top of it for his name on the keyboard here.) I wanted to get a picture of him yet he suggested a picture of the both of us which was nice. My Mum has liked him for many years so I also took a picture of the both of 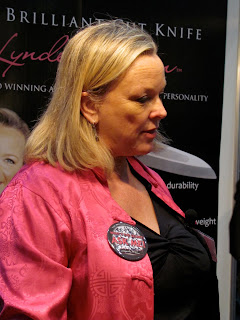 Australian food personality Lyndey Milan was there promoting a regional food producer's market and also some new knives which were there. With the regional food market side of it was important because it was giving local Australian products a chance to promote their produce.

Seeing it was the last few hours the different stalls were giving away bargains on certain items so for smart person they were getting them. Also there were a few freebies which were being given away from item which were being sold. Mum and I were having a ball of a time having a look through the show while I was finding many things to taste. We got to the wine-tasting end and decided to have a seat for a bit of a break. Next thing we heard was an announcement over the loud speaker saying that in ten minutes time at 5pm the show was going to close. Mum looked up at me in surprise because we both thought it ended at 6pm. Yet we didn't have an hour of wandering yet just rushing back through the halls seeing things that we missed.

On the way back we grabbed a few bargains which were great yet missed a few that couldn't be helped. It looked like other people had a good day because it seemed like everyone were carrying lots of bags also. Some under there arm, some in trolley bags, others dragging them on the ground and still others reminding me of camels. Were we all like ants bustling off to our car parks wherever they were. Then heading back our homes with our food parcels and trophies that we had gotten. When my Mum dropped me home I felt so tired that I lay on my bed to watch some TV.... watching a programme... then waking up to discover I'd fallen asleep after such a big day. Yet next year I'm sure it will all happen again when you can have breakfast, lunch and dinner in whatever order you want all in a few hours or minutes of one another!!!
Farewell for now!!
Posted by Megzz at 10:19 PM